A All Animal Company Profile 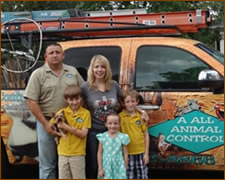 A All Animal Control was started in the small suburban town of Northglenn, Colorado one cold winter day in December of 1995. After only a few short years we realized we could help others make their dreams of working with wildlife come true. The AAAC method of wildlife control, industry leading damage repair techniques and business model were developed into a national wildlife control franchise system.

The ensuing years would bring an amazing transformation to that little small town business and position A All Animal Control to be the second largest Wildlife Management and Control Company in America. Through the guidance and leadership of its founder, Mark E. Dotson, A All Animal Control has grown to become a major industry leader in its markets from coast to coast.

After 19 years the A All Animal Control torch was passed to Brian and Josie Moss from Houston, TX. Brian and Josie joined the AAAC team as franchisees in 2008 after Brian’s retirement from the Army. Brian’s lifelong passion for wildlife and Josie’s background in marketing and business management was the perfect combination.

They soon took on the role as the national franchise training officers and in only a few short years they earned the title of the highest earning AAAC franchise office in the nation. Their experience and passion for the company made them the ideal team for taking the reins of A All Animal Control and leading the company into the future.

As the new owners of A All Animal Control Brian and Josie have continued to build the AAAC team and forge the future of the Wildlife Control Industry.